Aquaponics is regarded as a future technology in the field of nutrition. It enables the breeding of fish and the cultivation of crops in the controlled environment of a greenhouse. This can promise food security at a time when climate change is threatening crop yields. Extreme weather conditions lead to crop failures in soil. As for water, predators and rising temperatures threaten fish populations.

However, in order to introduce aquaponics into the food market, it would require facilities as large as a hectare – as well as even more automation says Professor Werner Kloas from the Department of Ecophysiology and Aquaculture at the IGB Leibniz Institute of Freshwater Ecology and Inland Fisheries in Berlin. He and his team recently demonstrated the feasibility of aquaponics with a large-scale model – on an area of 500 square meters. This was part of the INAPRO project, in which plants were modeled, built, and evaluated in Germany, Spain, Belgium, and China.

Aquaponics is suitable for urban food production within an area of a few hundred square meters. This eliminates the CO2 emissions that transport would cause. One example is the city farm in Eindhoven, which produces 22,000 kilograms of vegetables and 2,000 kilograms of fish annually on the fifth floor of an abandoned office building. All customers are located within a radius of one kilometer.

Plants of this size work because of direct marketing – and also because of the hype. But they are not yet economically viable, Kloas points out. “The only reason why the existing sites in the range of a few hundred to a few thousand square meters are profitable is that consumers are willing to pay a lot for aquaponics products. But as soon as larger plants start operating efficiently, this will probably no longer be the case,” says the professor. However, very large aquaponics complexes are still only in the planning stages.

Combination of aquaculture and hydroculture

Aquaponics combines aquaculture and hydroponics, which jointly share a water cycle. This leads to minimal water consumption and the complete elimination of chemicals. The technology simulates the biology of a pond and chemicals would disturb the natural balance. In their natural habitat, fish and plants live in synergy: the fish produce high-quality organic fertilizer for the plants with their excrement. In turn, the plants filter the water and assure high levels of water quality for the fish.

In conventional single-circuit systems, the water flows from the fish to the plants and back to the fish again. In this process, the water is cleared of the solids in the fish excrement using filters. Ammonium, the metabolic byproduct of the fish, is toxic for the fish themselves and is converted into nitrate by bacteria.

Kloas: “With the single-cycle system in conventional aquaponics, optimal conditions for fish and plants cannot exist simultaneously, given that fish and bacteria that convert ammonium into nitrate require a pH value of seven. Plants, on the other hand, require a slightly more acidic pH value of six. Aside from that, there’s a deficiency of micronutrients and macronutrients for the plants. As a result, complete nitrification does not take place and neither fish nor plants can thrive properly.” That’s why Kloas and his team have connected the aquaculture and hydroponics cycles with a one-way valve. This makes it possible to create optimal conditions for both fish and plants. 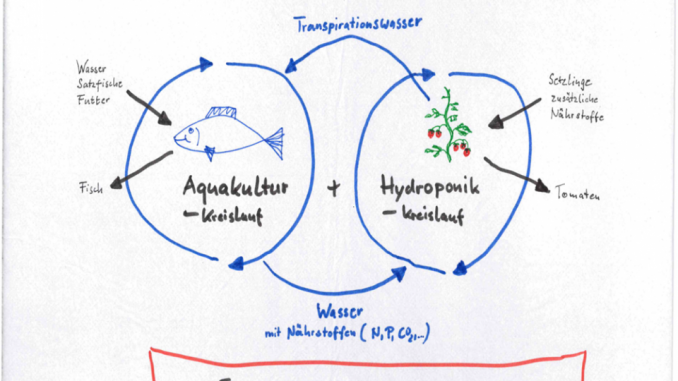 Photo: The principle of the dual cycle system drawn on a serviette

By making use of the condensation water, they also succeeded in reducing the amount of freshwater used. This is the excess water that plants release into the air through their leaves. This water is condensed again by the air conditioning system and fed into the aquaculture.

In practice, up to 90 % of the water used can be recovered that way, resulting in an almost fully closed water cycle. In central Europe, collecting rainwater would theoretically allow the entire volume of water required to be generated autonomously in such a system.” Werner Kloas“ Werner Kloas

Incidentally, in the ASTAFA-PRO project, tomatoes were grown alongside tilapia (a cichlid fish sort) – two organisms with similar environmental requirements. For instance, an atmospheric temperature of 27 degrees Celsius. The tomato is a relatively water-efficient plant but has needs high levels of nutrients. Kloas: “If you can successfully grow tomatoes in aquaponics, you can do the same with any other plant species that thrive in hydroponics. Tomatoes are also popular crops that we eat in Europe in fairly large quantities.”

Although there is a selection of fish species suitable for aquaponics, they differ in their requirements in terms of water temperature, oxygen content, and water quality. Since heating is about five times cheaper than cooling as far as energy is concerned, the researchers at IGB Leibniz chose a robust warm water fish species that are already well established in aquaculture.

State-of-the-art aquaponics systems are computer-based and are controlled by smart software and sensors. In order to be able to realize production on the scale of several hectares, a few technical problems still need to be ironed out. The main challenges are in the field of sensor technology. Sensors are used to measure and manage all components. Kloas: “There are already sensors in use for many of the parameters – such as temperature levels, oxygen content, and conductivity. Sensors for other parameters, such as ammonium, nitrite, and nitrate levels as well as the numerous salt ions are already available, yet there is still a need for research and development for their routine use in actual practice.”

Furthermore, more automation should be introduced in the coordination of the fish and plant compartments. Other problems apply to hydroponics and aquaculture just as much. For example, research still needs to be carried out in the areas of sustainable fish feed, animal welfare, and the enrichment ( optimization) of plant nutrients.

Research on sustainable fish feed is also a component of the current CUBESCircle research project, which is funded by the German Federal Ministry of Education and Research and the Project Management Jülich. Here, insects are integrated into the cycle to supplement aquaponics. These are fed with residues from the crop yield and are also added to the fish feed later on. Kloas speaks of a systematic perpetuation of the zero waste concept because it enables as many waste materials as possible to be turned into valuable materials.

The term CUBESCircle stands for interconnected, communicative, and standardized production modules. These are mobile and stackable and can be easily adapted to the rapidly changing urban environment. Plants, fish, and insects are each allocated their own cube. 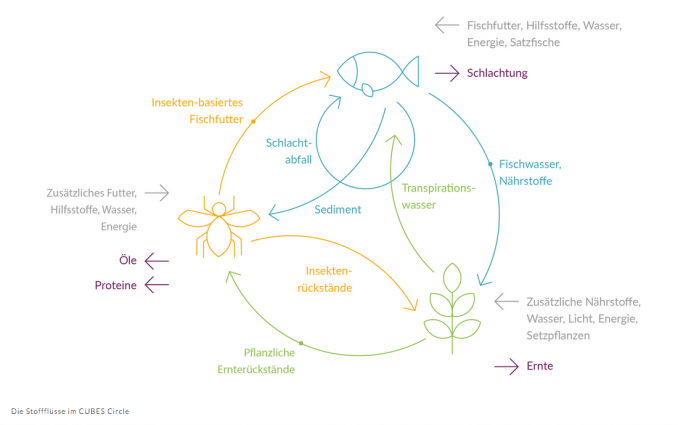 Insects are one of the most promising ways of sustainably harvesting high-quality protein. The protein-rich larvae of the soldier fly are suitable as feed for fish farms – but also for human consumption. Since insect farms are still relatively new, production systems and automated processing systems need to be redesigned. The aim is to ensure that high-quality protein is quickly available by shortening the time needed for its development. The researchers are currently looking into the extent that the organic biomass in plant cubes and fish cubes can be integrated into the production cycle and which organic biomass can be recycled from the insect cube.

Wanda Fish Technologies brings fish filets straight from the…
Goldfish can steer just fine - so can zebrafish
'A university is not a patent machine'
Mediterranean diet can lead to a high intake of…
Scanner against food waste can help curb CO2 emissions
'An aquarium's energy consumption can be much lower if you…
Manage Cookie Consent
We use cookies to optimize our website and our service. Help us to make our site better by accepting all cookies.
Manage options Manage services Manage vendors Read more about these purposes
View preferences
{title} {title} {title}