Afi is a monitor that detects cardiac arrhythmias in a simple and non-intrusive way. It can save the lives of thousands of people each year. Millions of people around the world have arrhythmias without being aware of it. They are at increased risk of having a heart attack or a stroke. But detecting a cardiac arrhythmia is not that straightforward. Nevertheless, to help shine a light on potential sufferers, Praxa Sense is designing an instrument that patients can tape to their chests for a month.

Leonard Moonen (aged 30) is the founder of the start-up and is working with the Dutch Heart Foundation. The device has been given the rather cheery name of  ‘Afi’, derived from atrial fibrillation, a telltale sign of cardiac arrhythmia.

What is your Afi device made up of?

Moonen: “Our device is a heart rhythm monitor, a small instrument with a number of sensors that continuously measure the heart rhythm and blood volume, among other things. The device is simply stuck to the chest with adhesive tape. The patient keeps it on for thirty days. After that, the data is analyzed using artificial intelligence and a diagnosis can subsequently be made.”

What makes Afi so special?

“If there happens to be a suspicion of cardiac arrhythmia, the electrical registration of the heart rhythm is then checked via an electrocardiogram (ECG). If the ECG fails to reveal anything, the physician can order a Holter examination. The patient is given a portable ECG recorder, which they must wear for 24 hours, sometimes up to as much as 48 hours. The patient is connected to between five and eight electrodes. It’s quite an ordeal. The doctor can read out the data manually once the patient has completed the procedure.”

“The problem is that cardiac arrhythmias only occur sporadically, often only once a month. Therefore, as a patient, you have to have a bit of luck that it shows up when you wear one of these Holter devices. Nevertheless, the Afi can accurately detect cardiac arrhythmias. The data can be read in real-time, even if in the first instance the doctor opts to analyze it after the patient has given the Afi back.”

What is the actual risk of cardiac arrhythmia?

“Atrial fibrillation, the main form of cardiac arrhythmia, can lead to either a TIA (mini-stroke) or a full-on stroke when blood clots rush from the heart to the brain. These strokes can be prevented if cases of atrial fibrillation are detected earlier, which enables a cardiologist to provide prompt and effective treatment. Cardiac arrhythmias also increase the risk of heart failure.”

“People often do not know that they’re suffering from cardiac arrhythmia. Or these are difficult to diagnose because they occur so sporadically. Nearly eight million people aged 65 or over in the European Union suffered from atrial fibrillation back in 2016. It is estimated that this figure will double by 2060. Untreated atrial fibrillation increases the risk of stroke by a factor of five.”

So, the ‘Afi’ has arrived at a very opportune time. When will it be on the market?

“Clinical tests will be carried out in two Dutch hospitals over the coming months. We expect to be able to start selling to hospitals by early 2022.”

What more can we expect from the Afi?

“At the moment we are working hard to convert the Afi so that it can also manage corona patients with respiratory problems. Most of these patients are sick at home, but we need to keep our finger on the pulse when it comes to the at-risk group (the elderly, patients with cardiovascular diseases, ed.). The modified Afi will monitor oxygen levels in a patient’s blood. If it is too low, then patients like these must be admitted to the hospital. If that happens on time, a patient won’t need to go to intensive care, which will relieve the pressure on that ward.”

The corona crisis is almost over. Aren’t you a little late for this?

“It couldn’t be done earlier because it takes time to develop hardware. In any event, we estimate that we will still need another six weeks or so of development time. Production time takes one month then. As long as there is no vaccine for COVID-19, and not enough herd immunity has been built up, we should prepare for a second wave of coronavirus infections. In addition, it will still be a useful development to be able to follow patients more extensively at home in the future.” 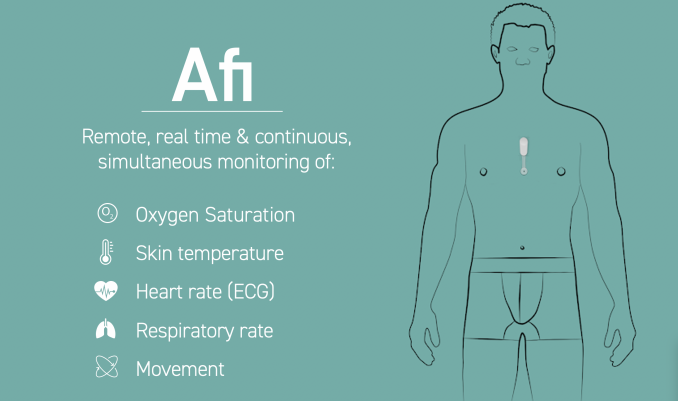 How are you involved in addressing the problem of cardiac arrhythmias?

“I’m an industrial designer with a master’s specialty in medicine. After my studies, I started my own design agency in Delft with Liselotte Stolk. I also studied at the CardioLab in Delft, which focuses on integrated product design. The Technical University of Delft, the Dutch Heart Foundation, and Philips Design work together in the CardioLab. The Cardiolab was set up to use smart technology for the early detection of cardiovascular diseases. The Heart Foundation asked me whether I could come up with a better solution for detecting atrial fibrillation. After that, I founded the company Praxa Sense together with Liselotte to further develop the product.”

How did you actually come up with the company’s name: Praxa Sense?

“That’s a great question. Praxa comes from Praxagoras, a physician from Ancient Greece. He was the first to realize the importance of taking someone’s pulse when making a diagnosis.”