How do you protect your ideas? At first sight, a boring subject, but an important one for entrepreneurial students, says Julie Moens, a student at the Eindhoven University of Technology (TU/e) and chairman of KICKOFF EHV. Together with Buster Franken, Gabriella Gomes Branco, Björn Burger and Arnoud Ulenberg, she organizes events about entrepreneurship. They look for ways to present the topics in a ‘spicy’ way. In the lecture hall ‘Light Assembly’ of the TU/e Innovation Space, IO talks with board members Moens and Franken.

The subject of intellectual property became ‘How to protect your idea’. On the 13th of February at half-past five in the evening – Moens: “Because it’s such a tough subject, we added a meal” – more than twenty-five students listen interestedly to Bart de Jong, retired, but previously regulated the intellectual property within the TU/e. Max van Dijken, a third-year student Industrial Design, is one of those. He would like to know how and when to protect your idea. “We have a family business at home, but our idea is not protected.” Van Dijken is there for the first time and thinks there is a “nice and informal atmosphere”. The Hungarian Reka Magyari, the Lithuanian Kamile Vaitkute and Vim Gunatilleke from Sri Lanka would like to know how they can protect their ideas as well. They also think Eindhoven is a good place for innovation. Magyari: “There is a lot of cooperation between students, the university and companies.” 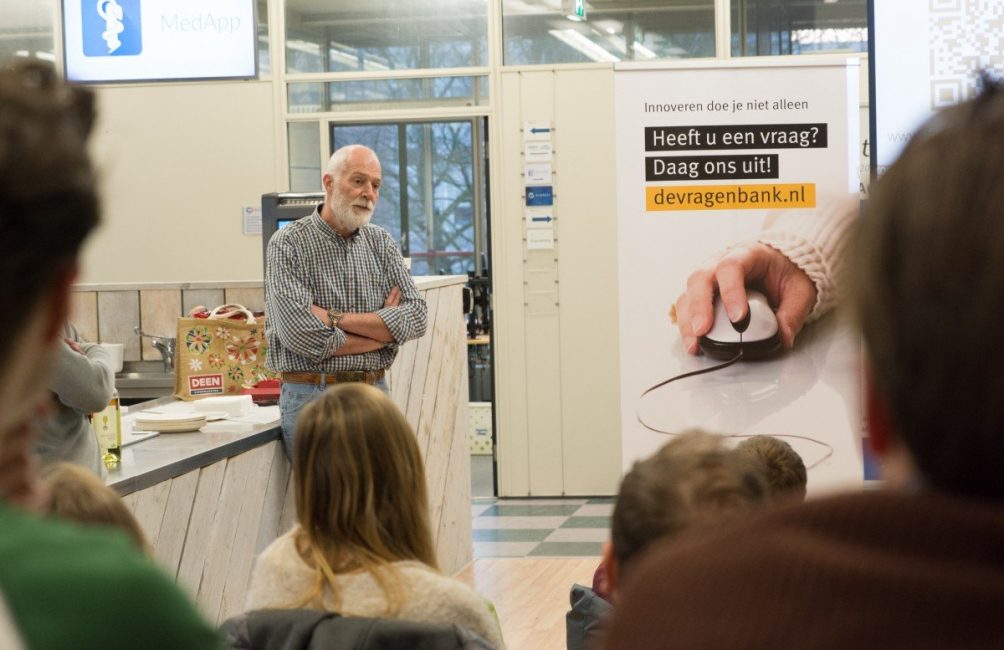 It has to be a community for student entrepreneurs, Moens says. They have ‘rebranded’ the association this year. “We want to help students but also inspire them. For example, to take their ideas to the market now and not wait until after their studies.” It is still just for students of the TU/e but there are contacts with Fontys and the goal is to involve the Design Academy too, Franken says.

KICKOFF EHV was formerly called Eindhoven Student Business Club (ESBC). “But that sounds quite serious. I thought that you had to have a startup to be part of it,” Moens admits. That had to change, according to the new board members; accessible and informal. Franken about the name: “You need a start from where you are going to do business. For a lot of people, there never is a start. You have the feeling that you need to have ‘the perfect’ idea. Especially researchers, because they are even more aware of all the other good ideas that exist. To get a good idea, you must have failed a few times. It sounds pretty standard but you need to learn that you just have to start. Hence kick off.”

The former ESBC was created with the start of the Innovation Lab. That was in 2013. For subjects that did not fit into the curriculum, the teachers organized events themselves. “But only three or four students came,” Robert Al, business developer at Innovation Lab, says. That’s why they asked students to do this alongside their studies, voluntarily. The board changes every year and this year the board consists of Moens, Franken, Gomes Branco, Burger and Ulenhout.

If you want to do business, you have to think of many thinks, Franken says: “From intellectual property, board liability to networks and funding. We’ll discuss all that.” Throughout the year, KICKOFF EHV organizes a series of events, “if you follow them, you’ll get a kind of crash course”. The board does try to give a bit of “spice” to the material. “For example, Björn and I made a cool promo for the intellectual property event. I did the pictures he the poster.” 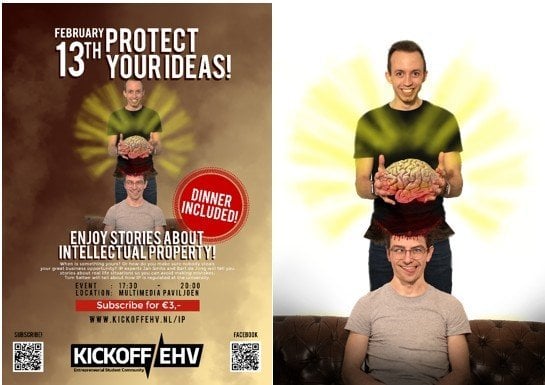 Moens focuses this year entirely on helping her entrepreneurial fellow students. Last year she got her bachelor’s degree in Industrial Design and took a year off. In addition to her chairmanship, she works as a student assistant in Innovation Space, a lab where students can test their ideas and learn to deal with complex social and industrial issues. It started two years ago and moved into the Matrix building last year. “It’s not the same as the entrepreneurial community. But I see that it contributes a lot. People here start talking to each other and find out that they can help each other. Here students from different faculties really work together. For example, a team of chemists and a team with a technical background in business administration. It is so accessible and that network is of such great value.” Moens uses this knowledge of meeting each other at the events organized by KICKOFF EHV.

Franken is a co-founder of FruitPunch.ia, a student team, he holds a bachelor’s degree in mechanical engineering and is working on a premaster’s degree in data science. Moens: “I like that so much about those enterprising students, they are so busy.” Franken: “We just do a lot.” Franken gets up every day at six o’clock, goes to work out for an hour and a half, “That’s how I get through my day.”

Moens: “What we find important is that we offer the subjects in a creative way. An inspiring story of someone from the TU/e who, for example, already has got funding covered. For the theme of pitching and networking, we don’t have another workshop about how to do that. We invited an improvisation theatre teacher and he really made a difference.” For branding, for example, they invite a graphic designer to give feedback on the students’ corporate identity.

KICKOFF EHV also organizes free lunches without information section. That attracts around 65 entrepreneurs, Moens explains. This year, for the fifth time there is ‘Get Started’, the largest event attended by some 150 students. “This year we are linking this to the Golden LightBulb Challenge. A challenge from Eindhoven with a prize of 10,000 euros. The final is in April and we link it to Get Started. So much is already being organized for students.”

'I hear too often that women have to be harder, more…
'Quit your job for one day a week'
Thinkers, designers, doers and aspiring builders team up to…
New crop of innovative student teams at the TU/e Contest
Team CORE uses shredder to safely chop up batteries in salt…
Simbeyond advances with first-ever nano-level simulation…