Stubborn perseverance is needed when it comes to convincing legislators that innovation offers opportunities rather than risks. And that it can be implemented under existing legislation. ICT specialist Erhan Kolcuoglu demonstrated this by devising a way to adapt a city car so that it can be used as a cheap alternative to a taxi. Two of these modified cars now serve a growing market of private transportation services in Rotterdam and Schiedam. The plan is to have interested franchise parties provide Huprr services in other cities next year. In the meantime, Kolcuoglu is still working on a new concept for what might be called Huprr Fly: “Like a flying taxi between cities.”

The Huprr Fly is still in the design phase. However, Erhan can already show a preview of the flying car’s shape and the alternative transportation service that it will eventually be providing. One of the things the ICT specialist is looking at is the way in which drones are used for the transportation of packages. You can watch a video of the Huprr Fly taking off, although it will be quite a while before it is actually airborne. That time is needed for extensive research and further development for the operation of the ‘flying car’ and the service it offers.

Anyone who has had to deal with drones is aware of how legislators, regulators and law enforcement agencies can restrict the use of innovative inventions. Kolcuoglu knows that better than anyone else. It took three years for his idea for private urban transportation to become a reality. The ICT specialist had carried out extensive research and obtained legal advice on the feasibility of his idea prior to that.

In brief, his business model means that the innovative three-wheeled city car can be used without the need for a taxi permit. Plus it is much cheaper than a regular taxi service. He says: ” My idea started out with wondering why a taxi ride is so expensive. The answer is simple. Taxi operators use expensive cars. The result is that the purchase (and often lease), maintenance and energy consumption are also expensive. These costs are passed on to the passenger. That inspired me to use a city car for a fixed fare much lower than the usual taxi fare.“

Coming up with the name Huprr was the easiest part of the research and development process. The name stands for HUurPRivéRit (in English: HirePrivateRide). It took a little longer to choose a city car that could be adapted and that would be able to comply with laws and regulations. The search led to a Ford Ka model, for which a new rear axle was designed. The two rear wheels were placed closer to each other and the engine power was lowered to 14Kw (20 hp).

Three-wheelers do not fall under taxi regulations

As such, the motor vehicle qualified as a three-wheeler. These do not fall under current taxi regulations. The two cars owned by Huprr were rebuilt in Eastern Europe. The modified automobiles then passed the TÜV inspection. Erhan and his garage partner also secured the patent on the ‘rear axle invention.’ 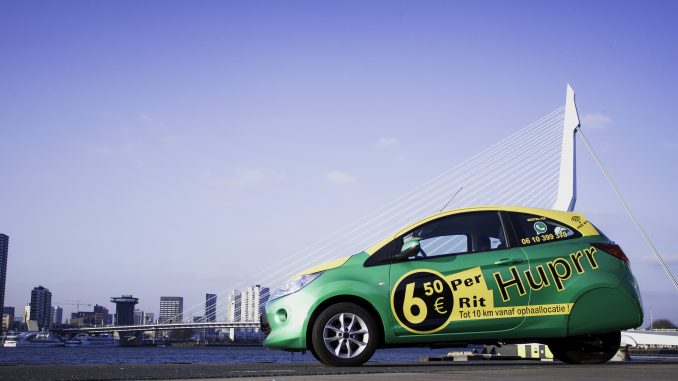 In the meantime, Erhan and his daughter Arzu are able to provide their alternative passenger transportation services within the framework of existing laws and regulations. It took them some effort to convince the RDW (Netherlands Vehicle Authority) and the Inland Revenue that the modified city car and the service provided comply with existing regulations. They have certainly felt checked out by the established taxi agencies. These stalwarts have since come to realize that Huprr is not a copycat version of how so-called pirate taxis and Uber operate. The low cost concept of Huprr is also different. It is lucrative, although Erhan is constantly working on the further development of his Huprr idea. A new track and trace app for rides is one example of this is. It allows a passenger to track the Huprr ride that they have ordered.

This is what three-dimensional urban traffic could look like

There is scope for this now that private passenger transport has become better established. Since then, parcel services for private individuals and the business market have been developed and marketed through combining parcel deliveries with passenger transportation. It involves pick-up and delivery within an hour and within the city. Private individuals can have shopping orders, meals, clothing and whatnot delivered. Business customers from various sectors are catered for with the delivery of documents, parcels and other items. All within the hour for a fixed fee.

In the meantime, 23 second-year students from the Inholland University of Applied Sciences in Rotterdam are preparing a pitch to show how the existing Huprr concept can be implemented in foreign cities. They will present their ideas on the 28th of October. Erhan already sees opportunities for further cooperation within programs at the Rotterdam University of Applied Sciences as well.

So far, any banks that had serious doubts about the profitability of the start-up Huprr have been proven wrong. Kolcuoglu states on the financial section of his business plan that crowdfunding is not an option for him. He prefers other forms of financial involvement as part of his disruptive innovation approach. It became clear to him that investors are interested in this, but don’t go beyond that: “They say ‘oh, what a good concept’, but don’t want to invest any money in it. That’s a pity. So I just go ahead and do it my way and that pays off. I pay a lot less road tax and we are managing to get the whole concept up and running with minimal costs. The CO2 emissions from the three-wheeler are also much lower thanks to a 14 kW power output. That’s why I say: Keep it smart and simple!”

Episode 5 - Rotterdam: a red-hot Noordereiland and an oasis…
For a smart city, you need to densify, not expand
By air taxi from Dutch city of Groningen to London: 'We'll…
From 100-day projects to long-term studies: Fontys ICT…
Each Amber should soon replace twenty private cars
Maastricht has the most heat stress-resistant inner city in…
Manage Cookie Consent
We use cookies to optimize our website and our service. Help us to make our site better by accepting all cookies.
Manage options Manage services Manage vendors Read more about these purposes
View preferences
{title} {title} {title}