The success of the high-tech manufacturing industry in the Brainport region is largely attributable to the suppliers. Nowhere in the world they have had such an important role as in and around Eindhoven. Their transformation from supply chain into a value chain – from contractors to collaborators – is the main reason why Eindhoven could turn its rust belt into a brain belt. Antoine van Agtmael and Fred Bakker’s new book “The Smartest Places on Earth” puts Eindhoven among the world’s top regions for innovation. 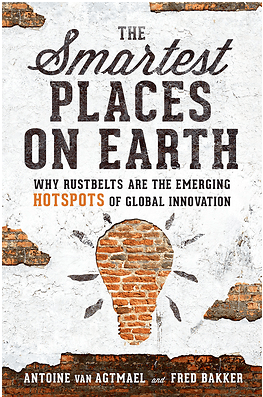 The two authors have visited dozens of Brainport-like regions in the world. The ten most interesting ones (five in North America and five in Europe) have received a chapter in their book. Eindhoven is one of them. We interviewed Fred Bakker – former editor and director of Het Financieele Dagblad – in the midst his American book tour, which takes him to renowned places like Yale, MIT and Brookings. And the Diana Rehm Show.

First, let’s take a look at the difference between the traditional supplying system and the way it has evolved in Eindhoven. “In a traditional industrial supply chain, the manufacturer designs a product, writes specifications for that product’s components, and works with suppliers to produce the components to spec, on time and on budget. In a value chain, however, suppliers also act as research-and-development partners. They get involved much earlier in the process, contribute their knowledge to product design, and collaborate in developing the best methods of manufacture. In other words, suppliers become collaborators who add value throughout the process.“

Obviously, ASML is the best proof of that assertion; the chipmachine manufacturer owes much of its success to its supply chain. But at least as much attention in the book goes to Hans Duisters of Sioux – who started as a traditional supplier but grew into an integral part of the brainsharing ecosystem. “Sioux showed that it could not only build components, but also completely new products.” Duisters is convinced that growth is still possible. He expects that the big tech companies from Silicon Valley, Israel or Singapore will come to Eindhoven, “to find out whether the high-end precision products they want to develop can actually be built.”

Bakker’s fascination with revival areas dates back to the time he worked for the FD. “In our newsroom there was some cynicism about the ambitions in Eindhoven. But after I had spoken with Gerard Kleisterlee, the former CEO of Philips, I found out there was no reason for that. He made absolutely clear that he wanted to invest in knowledge, rather than just look at cost cutting. He was one of the first to note that a technology company, even one as large as Philips, could not survive on its own. So he decided to open the NatLab to outsiders in 2002. Actually, it was the beginning of the High Tech Campus, a defining moment in the revival of Eindhoven.”

What happened in Eindhoven, one can witness in more places in the world, Bakker and Van Agtmael discovered during his research. In the United States this was mainly linked to old steel and automotive areas; hence the subtitle “from rustbelt to brainbelt.” Bakker: “In Europe, it was not so much about real rustbelts, but the phenomenon behind it is similar. It’s about areas that once were successful but at some point moved their production facilities to low-wage countries and thereby lost their strength.”

Bakker and Van Agtmael visited the areas that recovered and discovered that cooperation was the recurring theme. “The old silos were broken, there were horizontal solutions for vertical problems. You can see it in all the cities we visited. But nowhere as intense and as extensive as in Eindhoven”, Bakker says.

Brainport’s current success is no guarantee for the future. Bakker sees two risks that the region must take into account: one moral, the other more related to the organization of the business. Bakker: “Technology is not normative. Human beings have to add that element, but the tendency is that all that is technologically possible, will be built somehow. Which ultimately can lead to what we have seen in the financial sector. We really need a person to stand up and say ‘stop’ once in a while.” CEO Tim Cooke of Apple has shown how this should be done, says Bakker. “Great to see that he didn’t give in in the discussion on unlocking iphones for security reasons, as demanded by the FBI.”

On top of that, there’s the risk that companies like ASML have gotten to such a level of specialization that this may harm their development power. “ASML has invested a lot of time and money in the development of the EUV machines. But to make this a success, pretty much everyone there will have to focus on the further development of it. In other words, there’s a huge risk that all the talent within ASML is condemned to EUV. As a company you need to have the discipline to also focus on the not-so-obvious.” 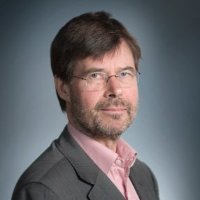 At the end of the conversation Bakker asks whether there is still time for an anecdote. “Just to clarify the unique position of Eindhoven. I recently visited Aachen where I spoke with Karl Siebertz at the research campus of Ford. Siebertz is a leading researcher, with close ties to the Technical University of Aachen,and  like all Germans he is very proud of what his country is performing. But you know what he said? That there is no better place for applied research than at the Technical University of Eindhoven. The interaction with the High Tech Campus and the business community, the skills that they have there. When a German talks like that, you can be pretty sure something unique is happening in Eindhoven.”

‘The Smartest Places on Earth’ was published last week. In June there will be a Dutch translation. Bakker and Van Agtmael will do a book tour here as well, inclusing a vidit to Eindhoven. More information on the website Hier Wordt De Toekomst Gebouwd.