In the coming years, Eindhoven Airport will focus on innovation instead of expansion. At the beginning of this month, the Minister of Infrastructure and Public Works, Cora van Nieuwenhuizen, decided that Eindhoven Airport should not be allowed to expand any further until 2022 at the very least. “It gives us room to see how we can organize processes at and around the airport in a smarter way,” says innovation manager Ivar van der Smaal. The airport wants to work more closely with regional partners in order to achieve this.

“Previously, we had little focus on and opportunity for innovation because we were completely occupied with facilitating expansion,” says Van der Smaal. One of the main reasons for the halt to expansion is the level of noise pollution and CO2 emissions. “We are in a smart region where numerous solutions are being sought to problems. We want to make more use of this knowledge by working together with each other.”

Project university as a starting place

Earlier this year, Eindhoven Airport already undertook a project with the Eindhoven University of Technology (TU/e). Students came up with a solution which could reduce queues at peak times during the security check. They devised a security quiz that travelers could play on their phones after scanning a QR code. “The questions were about the procedure for the security check. For example, whether or not a belt should be taken off. Another question is whether electronics should go into the trays separately,” explains Van der Smaal. When travelers answer the questions correctly, they are allowed to pass the checkpoint via a faster track. “Experienced travelers no longer have to wait for people who don’t know what to do. In addition, the security staff also have less to explain to these travelers during the fast track.” 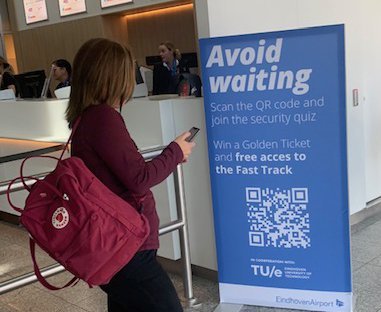 The idea was tested in two different ways. “One day students actively approached travelers to take part in the quiz in order to bypass the security queues,” he says. “Then next, just for one day, we put up information posters so that people could scan the QR code themselves.” According to the innovation manager, travelers were very positive. “Unfortunately, however, we were not able to test this during peak periods. That’s when travelers are really want to take part.” This is why he wants to test the idea once more during busy summer months.

Working together with students often raises eyebrows. “The approach to particular problems is usually very different from what we are used to,” says the innovation manager. Students think more out-of-the-box. “We could have set up large communication kiosks, but smart and interactive information provided via passengers’ smartphones seems much more effective.”

Airport is taking the lead in cooperation

Van der Smaal: “The results of this small pilot show enough potential for continuing this partnership.” In the coming years therefore, Eindhoven Airport wants to cooperate more with design, technology and knowledge institutes, start-ups and companies from the region. “There are various social problems that we can solve together, for example in the areas of sustainability and mobility,” he says. He sees the airport as having a role as a mediator and facilitator in this respect.

The actual issues that the airport wants to address are as yet unknown. The parties involved will be looking into this in the near future. According to the innovation manager, mobility around the airport could be one of the areas for improvement. “For instance, we could collaborate with transport companies and parties where autonomous driving and smart mobility are concerned.”