Researchers from TU Eindhoven and TU Twente published a study in the Nature journal about the first building block for a new kind of self-learning system or computer which is inspired by the brain. That’s what the two universities announced on their website on Wednesday. One of the great advantages of the network is that its not only able to make fast and complex decisions, but it’s also very energy efficient. This could make it ideal for self-driving cars, among other things.

TU Eindhoven: “Our brain is incredibly good at recognizing at a glance such things as images or patterns. Artificial Intelligence (AI) sometimes does that just as well or even better. Yet it uses way more energy than the brain does, which does it with 20 Watts. This is why the semiconductor industry is increasingly drawing inspiration from the brain, for instance by mimicking neurons in electronics or software. However, hundreds or thousands of transistors are needed in order to be able to mimic just one single neuron.”

The “disordered dopant network” that the two Dutch universities are now presenting takes an entirely different approach. It does not use pre-designed neurons, but uses material properties for arriving at a solution. This technique is energy efficient and can also be used on a very small surface, such as a microchip. 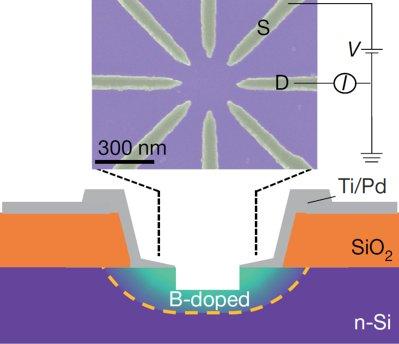 “Dopant is the key word here,” the Universities assert. “This is the deliberate application of impurities in the crystalline structure of silicon so that it can create a properly functioning transistor as a result. The chemical element “boron” is often used for this purpose. The amount of boron must be large enough to enable the transistor to work properly. Smaller quantities cause phenomena that a chip designer prefers to avoid. And it is precisely these phenomena that the new network makes use of. The number of boron atoms is so small that electrons hop from one boron atom to another.”

This has similarities with our brain where neurons connect with each other in order to perform a task. This network is fed with 16 distinct patterns in the Twente/Eindhoven experiment. It delivers a signal to each of the 16 patterns without you knowing in advance what the network is going to do. Using these 16 basic patterns, you can subsequently recognize a collection of handwritten characters with great accuracy, to cite just one example. The first version of the network is 300 nanometers in diameter and contains about 100 boron atoms. Energy consumption is about one micro Watt (one millionth of a Watt). The researchers envisage that this is the first building block of a larger network.

The researchers expect that the new system or computer will mainly serve applications where many decisions need to be made on the basis of observation and recognition. A good example of this are self-driving cars.