During Dutch Design Week, e52 will be introducing you to the hidden gems of the festival. Together with Dutch Design Daily, we’ve selected nine special designers whose sparkle has caught our eye this year. Each day of DDW there’ll be a different hidden gem put under the spotlight. Today: the Playing Life exhibition (including the meet&greet at 14.00 today!)

Who the Playing Life exhibition Where Veemgebouw, Strijp-S (Note the change of location!)

There are no beautifully-shaped vases, tables or candleholders at Playing Life. This is where you go to see (and experience) the new ways in which living material can be worked. Other forms of meat production or a sensible solution to fishing waste, for example. Playing Life is about speculative design, which sometimes pulls visitors outside of their comfort zones through a thought-experiment on the future of biotechnology.

The Bistro In Vitro ice cream van will make its début at the exhibition with its polar bear, chocolate panda, meat and fruit flavours. Koert van Mensvoort from the Next Nature Network is behind it all. We previously wrote about Bistro In Vitro, the virtual restaurant he ‘opened’ to prompt people to think about the possibility of cultured meat, following the first hamburger made from stem cells in a lab.

Cultured meat is a possible animal and environmentally-friendly alternative for feeding the meat-eaters of the future. Van Mensvoort: “But it’s all about exploring. What can still be done with animal-free meat? We tend to imitate sausages and meatballs, but why not try something completely new?” There’s already chocolate panda with meat-fruit ice cream at this year’s DDW.

The interest in living material in Playing Life isn’t limited to experiments in advanced labs. Curator Arjen Bangma: “We’re also looking into new creation or processing methods for living material in other areas.” Nienke Hoogvliet‘s project Re-Sea-Me deals with the huge surplus of fish skin in fishing. “If this waste product were treated with an old tanning technique, it would boast the same qualities as cow or pig skin. There’s a real possibility of this being developed into an industrial product.” 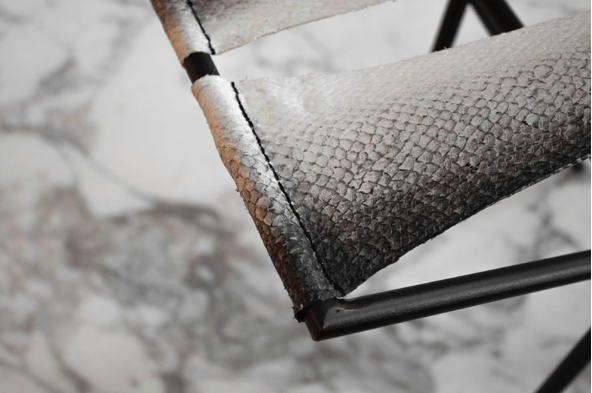 Playing Life will also feature Ted Lawson‘s Ghost in the machine project, a large print made with his blood as ink. The American artist was hooked up to the plotter by a drip that served as the feed.

Want to learn more about the Playing Life exhibition? Come along to the special e52 and DDD meet and greet event in the Veemgebouw from 14.00 on Saturday, 17 October. No need to sign up. Nienke Hoogvliet will be giving a demonstration on tanning fish skin. See you there!