Technological developments are chasing each other at an increasingly rapid pace. When one system isn’t fully developed yet, there is already a newer and faster version ready. It is even going so fast now that human knowledge stays behind. It is therefore necessary to give more attention to coding in education. Several companies from the Brainport region have taken up a lesson package  that starts at the beginning of September at the Christiaan Huygens College.  The Huygens Lyceum received the first Micro:Bits yesterday, which are part of the program.

Johan de Groote of NXP  – NXP is one of the companies that supports the lesson package – tells about his mission to make programming an extra language in education. “During an open day at the TU/e, where I went with my son, we heard that only in the second year, there was attention to the basic programming language. The students are 18-19 by then, that’s way too late. That really surprised me.” According to him, there are too many digital illiterates and if the coming generation is not going to learn about programming anymore, it will put the Netherlands at risk. “It’s especially about security because imagine the intellectual property of a company like NXP being stolen, that costs this region a lot of jobs. We must prevent this at all times.”

According to de Groote, the lack of knowledge is because around the nineties, people expected basic programming knowledge to become unnecessary. “The intention was that a universal language would take over machine-level programming, but when the programmable logic controllers (PLC’S) could perform more tasks, the necessity to have knowledge of the basic programming language didn’t become smaller, it became bigger. A turning point is also the Internet of Things, with this more and more devices are getting connected to the internet. And take big industrial companies like Bavaria and Shell, they all make full use of logically programmable units. For this, it is extremely important for employees to master the basic know-how.”

And that isn’t always the case according to him. A while ago he had a heat pump installed and that didn’t completely go according to plan. “It’s totally different from hanging up a boiler. A heat pump works with valves that open and close, it all has to happen at the exact right moment. But if the program that should control the pump is badly written, the system just doesn’t work well. I’m amazed that people who are educated to make things like that, don’t possess the right skills to make it work properly.”

“The developments of new Technologies, such as VR and AI, are moving very rapidly at the moment. To keep up, we need to invest more in technical skills. Otherwise, we will become a subject of technology.” That is why, among others, Philips, ASML, Deloitte  en NXP are working together with Jet-Net. Together they developed an education program that is held in September at the Cristiaan Huygens College. Jet-Net stands for youth and technology network Netherlands, it is a collaboration between government, companies, and schools. “In the lesson package, young people are going to work with Micro:bit. This teaches them coding in a very simple way, like a sort of puzzle. If the level rises, this can be extended with Arduino or Raspberry pi. This gives them more opportunities to improve their skills. It’s about logical thinking, if this then that. By applying this at a young age, it becomes part of their way of thinking, that’s where we have to go. This is a pilot, but the intention is that more schools will soon follow.”

“The insight now is that a new language must be introduced in education between 2020 and 2025, otherwise we as the Netherlands have a problem. I am confident that that will happen, from the media there is more and more attention for it. Also in the Randstad (conurbation of Western Holland), more projects are being launched to do something about digital illiteracy. But also national politics will have to bear its part. When that happens and these mushrooms grow big enough, it also becomes possible to make the lesson packages nationwide.”

Besides awarding the first Micro:bits to the Huygens Lyceum, an escape room was opened yesterday based on Micro:bit. By solving assignments and programming the minicomputer in the right way the kids were able to free themselves. This escape room can be visited all week. 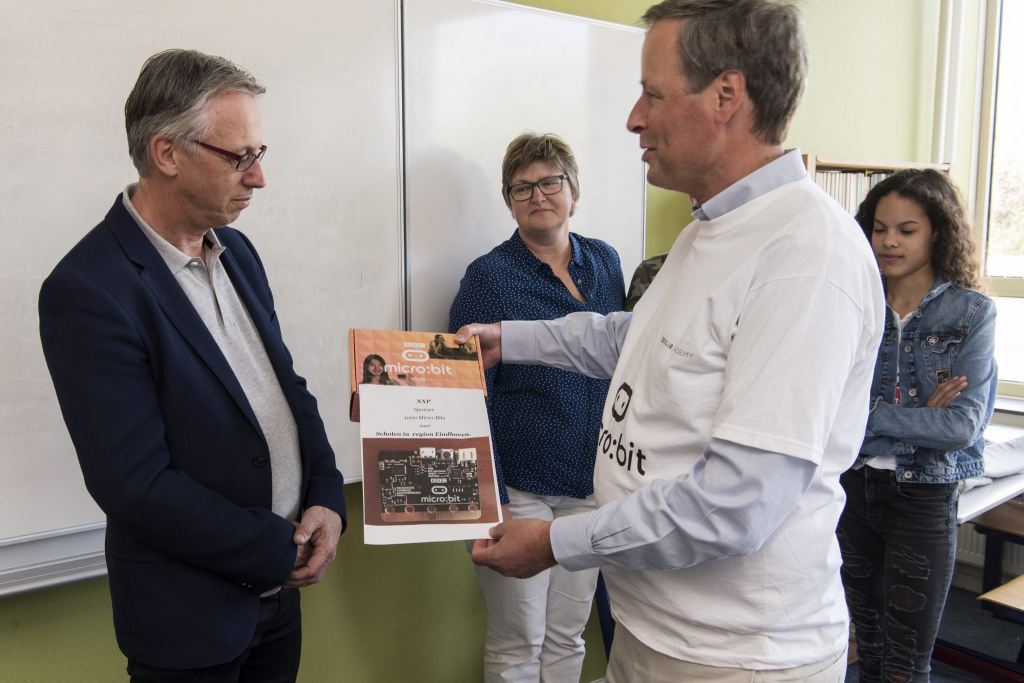