Initiated by E52 and High Tech Campus, the 10 most promising startups-to-watch from the Brainport Eindhoven region have been announced for the fourth consecutive year. On July 12th they received a Gerard & Anton Award. The winning companies are highlighted one by one in an interview. Today part 5; read the whole series here.

Bitsensor is an online security company, the founders claim to detect hackers within fifty milliseconds, through the company’s self-protective technology.  This normally takes on average nine months, but it also happens that an attack remains unnoticed. Unlike other security software, the software of Bitsensor runs in the application, whereas others are placed around the application to be protected, as a result, Bitsensor is able to map much better who and how someone tries to enter. Alex Dings, the founder of Bitsensor, welcomes E52 in their offices at the TU/e area, with cake. Because even though these men have won many awards recently, they never get used to it.

“In terms of development techniques, we are far ahead of the big boys”Alex Dings, founder Bitsensor 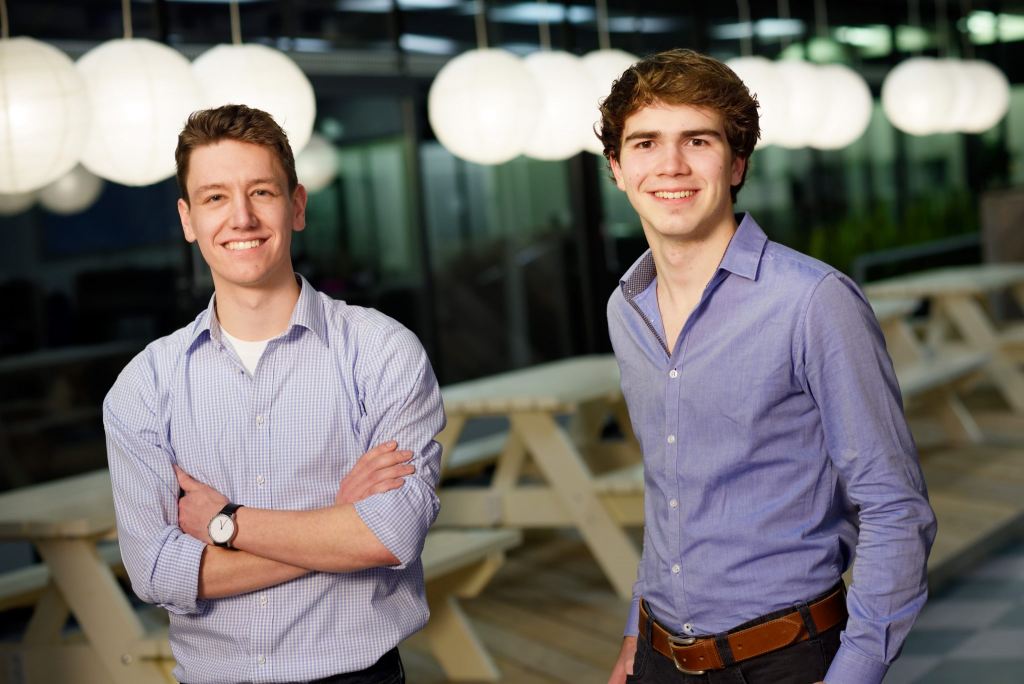 Bitsensor was founded by Ruben Vreeland and Alex Dings in early 2016. The company started with four employees, which has now increased to twelve. In December 2016, they collected an investment of the Belgian Volta of 400,000, they are currently preparing the next round. Bitsensor is working hard on whitepapers to show other big parties what they are capable of. The goal is to first enter the Dutch market and then expand to Belgium, Germany, England and after that the States. Bitsensor is working with six partners. These companies use the services of Bitsensor and secure other companies with it. But for a dozen customers, Bitsensor also directly monitors the security.

“Ruben has been an ethical hacker since he was young, he tries to enter everywhere and often with success. It is a thrill for him to show a weakness. But showing this weakness isn’t enough. We soon found out that there are a lot of opportunities in this world. WAFs (Web application firewall) are firewalls that lay around the application they have to secure like a shell. This is an outdated concept, hackers can easily get through this. With our technology, we are in the application, so we can get a very detailed picture of what’s going on. Because of this, we can’t only detect an attack faster, but we can also recognize attacks and set up a hacker profile, which will make the recognition even faster in the future. But sitting still is not an option, because hackers don’t sit still either. As a defender, you’re constantly one step behind to block hackers. That cat-and-mouse game keeps fascinating us.”

“It really is an experience for both of us: we learn a lot, go to places others can only dream of. Whereas other guys our age are sitting in the classroom, we are realising our dream and making a name in the cyber security world. I can’t imagine someone not wanting this.”

At what moment did you think: ‘I’m quitting’?

“Ruben and I are two peas in a pod. He is the technical mastermind, sometimes I have to slow him down, because there are very few interlocutors who have as much knowledge as Ruben. I can then come in between. That complements each other well. I am the commercial man, he’s the techie.” He laughs: “Apparently we’re a good combination, because I haven’t thought about quitting for a second.”

“We have been going through a hectic period lately. We seriously had to let someone go for the first time. That was a difficult decision, because when do you know it’s enough? We have had a lot of conversations about that with the investor. From my work at the TU/e as a consultant, I am used to working together with people, then it’s not normal to throw people out. But now you’re a serious company and if people don’t want to work as hard for it as you do, then that’s soon the end of it. It’s actually a bit like maintaining a relationship, you sometimes keep that going for too long as well because you want to keep seeing the good in someone. We may still be a small company, but this brings our culture in danger. We work on the basis of trust, it’s fine if you work at home. But if nothing happens and someone starts cutting corners, you have to make a decision.”

“We are now in a phase where the people we hire can be our biggest pitfall, don’t get me wrong though, because we have a fantastic team. But it is important that we all keep working according to the same culture.”

What makes you lyrical?

We have won loads of awards this year, which remains incredibly fun. Moreover, with every award we win, you see the attention in the company increasing. It’s fascinating to see how that works, people do always want to belong to the winner. We have been nominated for the Computable Award, we are very honoured by that and we really hope we are going to win it. This prize is awarded by a recognized jury and public votes. Computable is a reputable magazine.”

“It is awesome to see young talented programmers who want to come work for us. They appreciate our smart & cutting-edge way of working, they are also enthused by this way of developing software. In terms of development techniques, we are far ahead of the big boys. That is great, but you obviously want to maintain that. Here it is also important to hire the right people, with knowledge.”

“Another highlight, apart from the customer deals, was the deal with the investor, we were not really looking. Suddenly a ball started to roll and before we knew it, the deal was made. That was incredible and it has given us an incredible boost.”

What can we expect from you the next twelve months?

“Behind the scenes, we’re busy with banks and insurers, unfortunately I can’t give any names. That is something you can’t do often in this world anyway. Everything goes very discreetly. But we hope to come out with a big name soon. Purely to show the outside world that what we’re working on works. That is still hard sometimes. In reports you can’t show data of other customers. That’s a very sensitive matter, which we take very seriously. In addition, I as a businessman can not reach this data.”

“We are also working on other sales models, with several municipalities, we are discussing a way that when for example there’s a data leak, not the municipality, but the software supplier of software security company will be held responsible. A lot is still going to change about this in the future, we are using data more and more. All these data will have to be protected in some way.”

“Our goal is to expand significantly next year, more customers, more employees. Did I mention that we’re still looking for an extra person for sales? And we also have a number of developer positions open.”