The program Driving Dutch Design (DDD) has existed for five years and has created several successful designers. The program is an initiative of ABN AMRO, the Dutch Design Foundation (DDF) and the Professional Dutch Designers’ Organisation (BNO). The program was created in 2012 to help designers become better entrepreneurs. Studio VANTOT participated in the program last year. The duo Sam and Esther tells about their experiences and about how it has helped their career.

Why did you decide to participate in DDD?
“We both studied at the Design Acadamy and started a studio together afterwards. We’re in a relationship and at one point the finances started to intertwine and we thought: ‘what are we doing?’ We were working together a lot anyway. We individually did the course at the academy and we thought it would be nice to do this professionalisation course together as a duo.  To formulate together and taking the time to elaborate the business well. Besides, it is fun to get a podium with a whole group during the DDW.”

What has the program brought for you?
“There is no literal outcome of the program, all the contacts we gained have been much more helpful. It has really brought us a network, DDD suddenly opened a world to the Arnhem Design Week, you suddenly know people all throughout the Netherlands, you hear what’s happening in other cities and sometimes you collaborate. Designers don’t really openly talk about money and rates you ask, within this program you could. It was nice to be open about it here and to talk about your finances.  Besides, we now make a plan every year, we’re working from visions and we’re making budgets, we’re a bit more precise in that now, and we are making more time and space for it. We have also learned to use our network more and not want to do everything ourselves, we’re noticing that in that way we are getting more focus on doing what we’re good at.”

“Driving Dutch Design suddenly opened the world to the Arnhem Design Week, you suddenly know people all throughout the Netherlands, you hear what’s happening in other cities and sometimes you collaborate.”Esther, VANTOT

Do you think that the Design Academy should take up the task of this program?
“No. There is a big gap between the Design Academy and your time after that and entrepreneurship is rarely discussed, but Driving Dutch Design is not a program that would fit in there. It is good that in the program you start thinking about business, but learning accounting, making target audience analyses and focussing on finances doesn’t belong in the education course. We also had a theater course in the program, you had to take up roles and be vulnerable, you learned much more from that, something like that would be good at the academy. It’s not really necessary at the academy, even though that’s what you often hear, but if you look at all the designers that have started their own business after the academy and can mostly live of it, that’s quite special.

On the academy, you’re already so focused on building up your own practice, your own portfolio, when you’re still just at school. Really learning about entrepreneurship is something that comes after that, such a program is only relevant after your studies, you won’t remember any of it if you get it during your studies.”

What are you working on now?
“We have been working and focussing on led light for two years. We are actually looking at old crafts combined with new techniques. New technologies often have an application that is yet to come, but we like to look at what you would do with those techniques a hundred years ago. Products with new technologies often have a futuristic feel which makes it almost unattractive to have in your house. We try to put more feeling into the products. Take led for example, it is often seen as the lighting after the light bulb, but you forget all about that light bulb, how would you design a lamp? Led is actually not good to use as a sphere, it is better to spread the light so that the light gets better divided. Another example is our last collection, ‘Current Currents’, everybody is very scared to touch power in your house, but that isn’t necessary with low voltage. So why are we trying to hide entire electrical circuits in stead of making a system that conducts all the way, so that you can put lamps everywhere. This is now very much focussed on led, but I think the next step is to use a different sort of technique that is very new and to see what place that will take in our daily lives.” 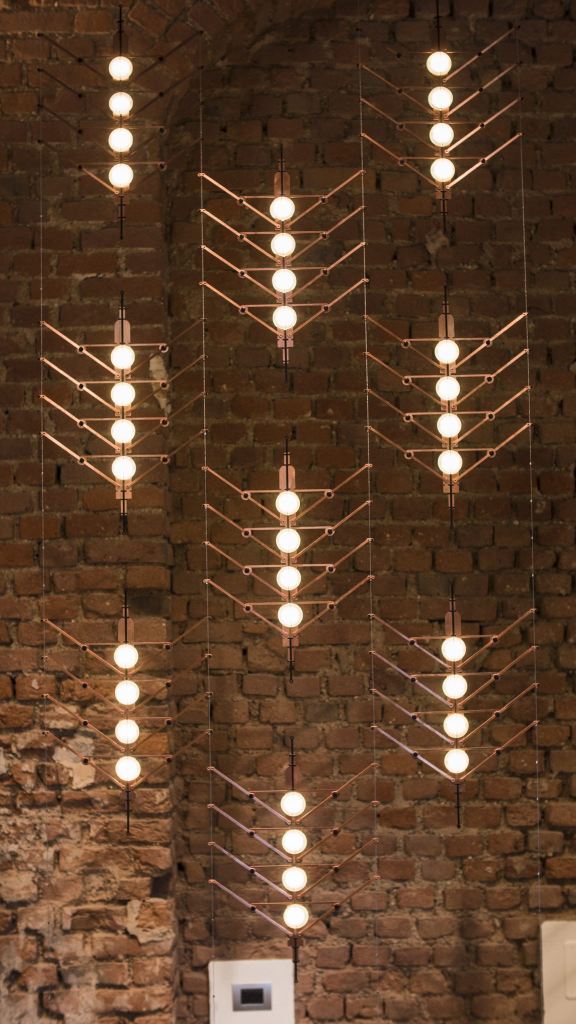