Just a few weeks ago, Bernhard was a participant at the ten days STRP Biennale with the Culture of Fear.  An installation that interacts with your body through measuring physiological changes and translating them into interaction and movement. Bernhard is one of the three winners of the STRP Award for Creative Technology (ACT). According to the jury, the Culture of Fear is an “extremely urgent and strong concept, full of current affairs value and social impact”. We meet up with Bernhard at his atelier at Sectie-C: “It were busy times for me, first the Biennale and right after that I started with the redecoration my new apartment. There used to live an old lady and before I can really live there, I first have to clean and remodel it big time. No time to rest,” he laughs.

“I don’t want to discuss the colour of a button endlessly. I want to contribute something to the world.”Bernhard Lenger, Designer

Bernhard shares his workspace other designers. “We share the common space with materials and equipment and upstairs I have my own workplace. It’s important for me with whom I share a space with. We need to be on the same level.  With the collective VanTot, Hannah van Luttervelt and  Mies Loogman I have a great connection. With Hannah, I am currently collaborating on a project for and with human rights defenders.” During the day he works as a designer and at night time he is a barkeeper at Kazerne. “I started working there when Annemoon Geurts and Koen Rijnbeek (founders of Kazerne, red) had their second popup when Kazerne was in the making. I was their first employee.” 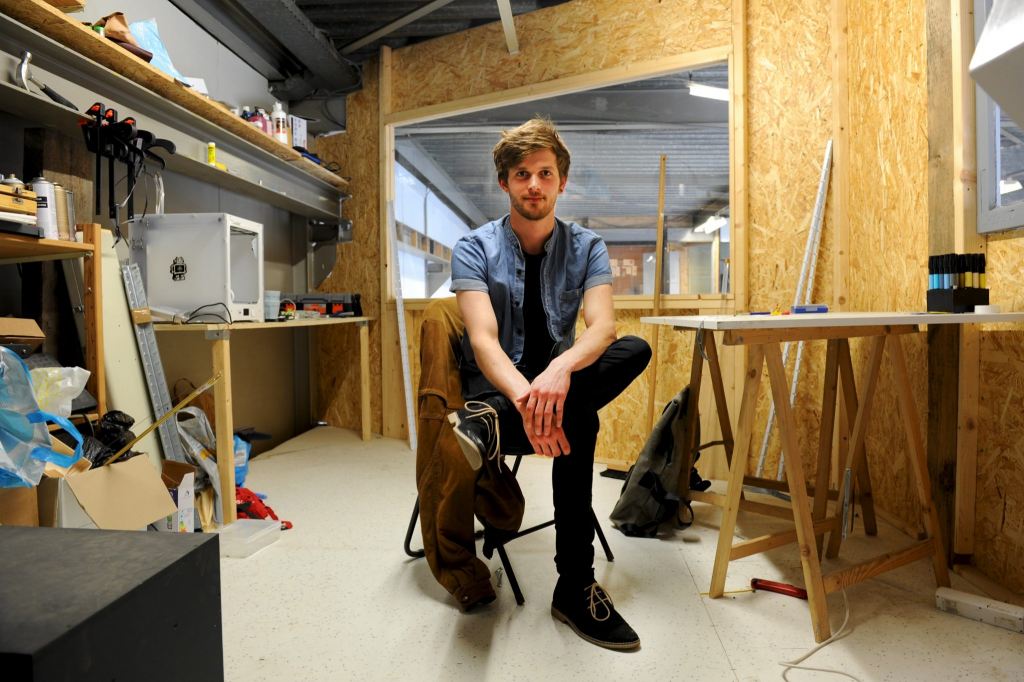 But how did he end up in Eindhoven? “Of course I knew about the Design Academy in Eindhoven, but I first applied at Universität für Angewandte Kunst in Vienna. Let’s say the admission test wasn’t what I expected it to be. The professors  didn’t challenge me to think freely. Afterwards, they asked what my next step would be. I replied that I would apply in Eindhoven. The response was that if I didn’t make the cut in Vienna, I wouldn’t make it in Eindhoven. Well… look at me now. I’m still happy it turned out this way. There is a big benefit in the fact the academy is in Eindhoven and not in Amsterdam or Vienna: I have more focus here. Eindhoven is a fine city and doesn’t  have as many distractions as the other cities.”

Bernhard also has a degree in Industrial Design, but nowadays he thinks different about his role in design. “I don’t want to discuss the colour of a button endlessly. I want to contribute something to the world. Product design isn’t a bad thing, but at this moment I can use my brain in a better way and be more meaningful, to my opinion. I’m focused on social aspects of society and current affairs. It feels like I have to do this. It’s more a movement than a category. A lot of designers feel the necessity to design for the now. We need to question things and look at the future. Like Hannah does with her work about weapons. I like her and her work so much. It’s a difficult topic shaped into a soft form and sense. That’s what design should do at the moment.”

After graduating from the Design Academy Bernhard wanted to stay in Eindhoven. But there were a few bumps on the road: “I was so surprised about how hard it is to find an affordable apartment for one person and where you can stay for a longer period. Sure, enough short-term possibilities, but I want to stay here for more than half a year. I was done with student housing, I needed a space for myself. And the expat housing isn’t within financial reach for a recently graduated designer. So I’m happy I found an apartment, but it wasn’t easy. I do like the cosiness of Eindhoven. And the people here care. I have everything I need around me.”