For 400 years we have been honing the technique of pattern-cutting. We work out the design of a three-dimensional body on a flat sheet of paper. Additive printing and 3D modeling could revolutionize this traditional technique – and that’s a big deal, explains Professor Christiane Luible-Bär in a webinar from the EU Re-FREAM project.

She is co-director of the Fashion and Technology (FAT) study program at the Austrian University of Art and Design Linz and acts as a mentor in the project. Artists who have promising projects are offered co-creation spaces at research institutes through Re-FREAM. With the support of technicians, they have nine months to advance their concepts – and in the best-case scenarios, get these ready for the market. The technology partners are located in Linz (Austria), Berlin (Germany), and Valencia (Spain). The technical focus in Linz is on additive printing (3D printing). The artists get to work on 3D printing concepts for fashion production. The hub introduced itself in a webinar at the end of June.

We tend to think of fashion designers as being a bit old fashioned in their methods. But we often fail to appreciate that there are clear limitations as far as covering the human body is concerned, as Luible-Bär points out. Woven fabrics were invented around 7000 years ago. The fact that we have been wearing them ever since is down to their truly unique properties. When we wear clothes, we want to feel comfortable in them. They shouldn’t hamper our movement nor tear when we move. Textiles should simultaneously offer the right level of durability and flexibility. Since clothing is in direct contact with the human body, breathability is another property key to textiles, the professor adds.

The problem with traditional textiles and tailoring techniques is the two-dimensional approach. “The 2D pattern-cutting technique is flat and you have to visualize what the design looks like on a body. If we make 3D models using software, we can not only work on a design that fits but on the materials as well,” Luible-Bär explains. With 3D printing, structures can be created by the temporary liquefaction of solid materials and a pixel-like reconstruction of those forms.

This not only has the potential to innovate methods but also opens up new aesthetic possibilities. This is one aspect that is crucial in the fashion industry. Another wonderful advantage of the simulation software is that motion can be taken into account in 3D-modeling. This is very difficult with traditional pattern-cutting techniques, says Luible-Bär.

One of the technology partners at the Linz hub is – alongside Haratech and Profactor – the global 3D printing specialist Stratasys. As Naomi Kaempfer, creative director at Stratasys points out, the project aims to make Poly Jet 3D printing more accessible and commercially viable. The technology enables 3D printing in a variety of colors. Photographs of stunning 3D-printed creations – for example by designer Iris van Herpen – belie the fact that these materials are not yet as comfortable as traditional fabrics. Stratasys launched a new technology in September 2019 that makes it possible to apply 3D-printing techniques directly to textiles. Kaempfer: “The textile becomes the basic structure of a garment. This will bring us closer to achieving the tactile properties that clothing needs.” Julia Körner and Ganit Goldstein from Re-FREAM are working on the marketability of the method as part of the first phase of the project.

Architect and designer Julia Körner came up with the design for the launch of the novel 3D printing technology. She designed the Setae jacket that features the gloriously colorful pattern of the Madagascan Butterfly – and imitates the unique velvety surface of the wings. Bringing the technology up to industrial standards means further simplifying the printing process, Körner explains in a blog entry on the project’s website. Until now, the format of the printing plate has proved to be a problem. It is too small to print an entire garment in one go. This is why it has to be printed in several pieces and then put together. In some cases, it may not yet be possible to assemble the garment at the location where it is printed. The aim is to have the entire production in one place. Then the garment can be made to measure on site – for example in a ‘makerspace’. Measurements are made using a 3D body scan.

The team at Yokai Studios has a completely different approach. The founders, Michael Wieser and Viktor Weichselbaumer, developed Loma Bond, a technology that can be used as a substitute for seams. Yet they also conceived the entire production process in 3D and recreate designs, pattern-cutting, and prototyping in a virtual environment. Production begins with a 3D body scan, which the 3D model is based on for cutting out patterns. In other words, the sections to be cut out are traced on the virtual body model and then converted into 2D using algorithms. A quick simulation is used to fit the garment. Incidentally, data resulting from this can also be used for marketing purposes.

The two have a vision of making the production process fully automated: similar like in real life, the robot will pick up the cutter tool, cut out the garment pattern, swap the cutter tool for the bonding tool and then attach the cut pieces. At present, they are still using a laser cutter to cut out the patterns.

The simulation software that’s required stems from architecture and furniture design, which means it is already available. What the team is working on is the interface for the automated production of clothing. An industrial robot with six axes that mimic freedom of movement is used for this purpose. Among other things, this robot is able to perform a modified 3D-printing technique and the Loma Bond too. It would be much simpler to use CNC (Computerized Numerical Control), which is an electronic process for controlling machine tools. But the two use the six axes of motion to produce the garment in a 3D environment – on a kind of mannequin. Their proof-of-concept already proved successful back in 2018 when they created a shirt this way.

Theoretically, you could process almost all types of materials. But in order to produce recyclable garments, the Loma Bond and the textile should be made of the same material. Biodegradable materials are currently not available. However, there are a number of research projects on these in progress.

The scope for innovation in 3D printing has not yet been fully tapped into. There are even people who are developing plastics that are algae-based or that use bacteria to produce protein.” Michael Wieser

In this and in other scenarios, 3D-printing would put fashion production back on track in the marketplace. Because, as Luible-Bär mentioned, the digital tool is not as labor-intensive and therefore not as costly as traditional methods. On-site production also offers many advantages. First and foremost, transport channels would be largely eliminated and the carbon footprint would, therefore, be reduced. Overproduction could also be avoided thanks to on-demand customized production. But 3D printing technology in itself is also sustainable. As is this case with knitting – it uses only the amount of material that is needed. There is no waste, unlke there is with conventional 2D pattern-cutting of clothing.

Recyclable materials are already on offer. However, the fact that the materials for Poly Jet 3D printing could one day contain natural fibers such as cotton seems a romantic notion as well as a slight contradiction, Kaempfer states. 3D printing is complex and transforms solid material into a liquid substance. It would not be possible to liquefy cotton in the same way. Aside from that, 3D printing tends to involve small batches and tailor-made products. This creates a strong bond between consumers and products. According to Kaempfer, this cannot be compared with disposable products in mass production: “It’s all about the life cycle.” 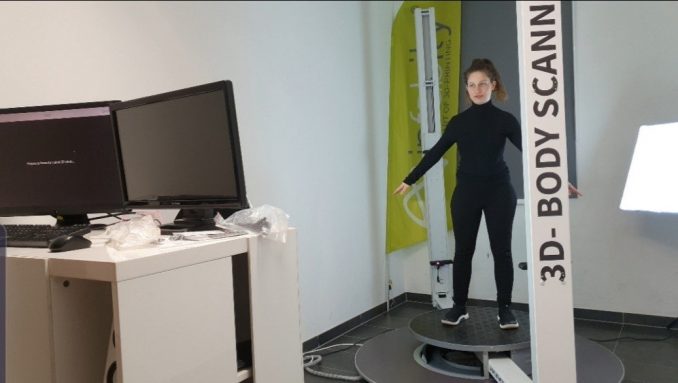 The artists participating in the Re-FREAM project do not believe that traditional methods will be replaced by new technologies. Instead, the aim is to further refine traditional methods and merge them with new ones. Even if it is two very different mindsets that come together in the process. Being able to think in three-dimensional terms is crucial, according to Luible-Bär.

In addition to 3D printing, Re-FREAM also focuses on smart textiles and textile post-processing. The Berlin-based IZM Fraunhofer Institute is contributing its expertise on wearables and eco-design. The AITEX textile research institute in Valencia has recently developed a method for post-processing textiles. Its expertise lies specifically in the area of digital design and water-efficient dyeing and (denim) washing processes.

Re-FREAM was proposed by Creative Region Linz & Upper Austria. The project is part of the S-T-ARTS family and is taking place within the framework of the EU Horizon 2020 program. Artists who have relevant projects are invited to apply. There are two terms, each lasting nine months. The second round for applications kicks off in July 2020 and runs until the end of September 2020. This means the second term for projects will subsequently start in January 2021. The maximum amount of grant funding is €55,000.

Rethinking fashion in the context of technology

A Take on Tech: How Technology Transforms Fashion Production

Hildegard Suntinger lives as a freelance journalist in Vienna and writes about all aspects of fashion production. She follows new trends in society, design, technology and business and finds it exciting to observe interdisciplinary tendencies between the different fields. The key element is technology, which changes all areas of life and work.